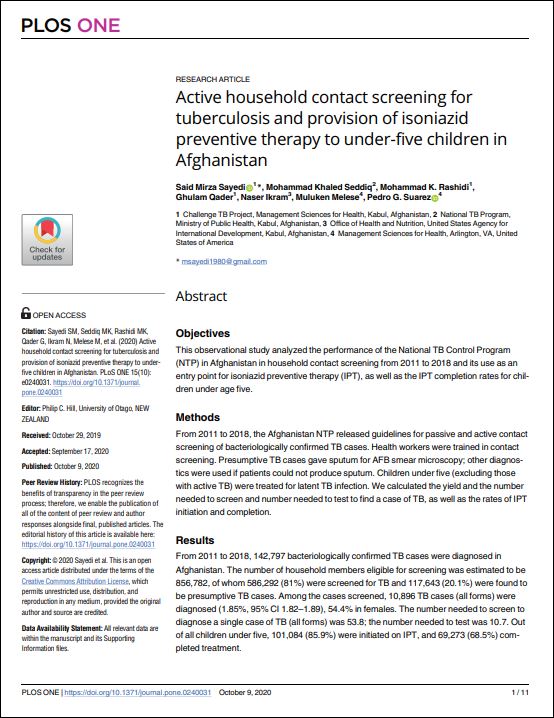 Citation: Sayedi SM, Seddiq MK, Rashidi MK, Qader G, Ikram N, Melese M, et al. (2020) Active household contact screening for tuberculosis and provision of isoniazid preventive therapy to under-five children in Afghanistan. PLoS ONE 15(10): e0240031. https://doi.org/10.1371/journal.pone.0240031
Abstract: Objectives
This observational study analyzed the performance of the National TB Control Program (NTP) in Afghanistan in household contact screening from 2011 to 2018 and its use as an entry point for isoniazid preventive therapy (IPT), as well as the IPT completion rates for children under age five.

Methods
From 2011 to 2018, the Afghanistan NTP released guidelines for passive and active contact screening of bacteriologically confirmed TB cases. Health workers were trained in contact screening. Presumptive TB cases gave sputum for AFB smear microscopy; other diagnostics were used if patients could not produce sputum. Children under five (excluding those with active TB) were treated for latent TB infection. We calculated the yield and the number needed to screen and number needed to test to find a case of TB, as well as the rates of IPT initiation and completion.

Conclusions
Program performance in contact screening in Afghanistan is high, at 81%, and the yield of TB is also high—close to 10 times higher than the national TB incidence rate. IPT initiation and completion rates are also high as compared to those of many other countries but need further improvement, especially for completion.