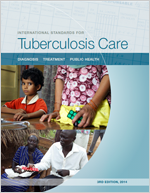 Abstract: Development of the first edition of the International Standards for Tuberculosis Care (ISTC) was funded by the United States Agency for International Development (USAID) via the Tuberculosis Coalition for Technical Assistance (TBCTA) and was guided by an expert committee of 28 members from 14 countries representing relevant perspectives and areas of expertise. The committee was co-chaired by Mario Raviglione of the World Health Organization (WHO) and Philip Hopewell of the American Thoracic Society (ATS). The group first agreed on a content outline and then identified areas in which systematic reviews were needed. Six reviews, largely related to approaches to diagnosis, were conducted and subsequently published in peer-reviewed publications.

Development of Edition 2 of the ISTC was also funded by USAID via its TB Control Assistance Program (TBCAP). A new expert committee of 56 persons from 15 countries, plus WHO, chaired by Drs. Raviglione and Hopewell guided the process. Only one systematic review, related to contact investigation (subsequently published), was identified.

Edition 3 was again funded by USAID via TB CARE I and was developed using essentially the same process. Development was led by Mukund Uplekar (WHO) and Philip Hopewell (ATS). A steering committee from the staff of the Global TB Programme at the WHO identified areas in which revisions were needed. It was felt that no new systematic reviews were needed for this edition. The standards in the ISTC are all supported by existing WHO guidelines and policy statements, many of which had recently been developed using rigorous methodology, including systematic reviews. The draft document was then reviewed by an expert committee of 27 members from 13 countries, co-chaired by Drs. Uplekar and Hopewell. Subsequent drafts were also reviewed and approved by the expert committee. The final draft was reviewed and approved by the TB CARE I member organizations (ATS, FHI 360, the Japan Antituberculosis Association [JATA], KNCV Tuberculosis Foundation [KNCV], Management Sciences for Health [MSH], the International Union against Tuberculosis and Lung Disease [The Union], and WHO).
Author(s): TB Care I
Year: 2015
Language: English
Resource Type: Guidance and Tools
Source: World Health Organization
Filed under: Guidance and Tools, Standards, TB care, Universal access